After 17 years of writing and hosting wine tastings for Taste of the Vine I have to make efforts to keep each event stimulating for myself. It would of course be possible to say the same thing to a different audience every time, but I would long ago have been carried, hog tied, to a padded cell if I approached it that way. Recently though I’ve been personalising our wine events at Taste of the Vine to a level I would have considered sheer indulgence a few years ago – when the TOTV journey was more about the trajectory of its profit curve than it is today. Now when I prepare tastings I try to make the format even more relevant to the audience and to choose wines that tell me a new story.

‘We’ve a group of geologists that need a networking event after a day’s conference; can you come up with something?’

This one was a gift. Normally I have to come up with a tenuous connection between wine and a financial product or a new piece of software.

'We could do a tasting challenge comprising English sparkling wines from different rock strata across the south of England,’ I said.

‘Perfect, that’s their region of expertise.’

Instead of telephoning our shippers and asking what they had, I set about picking up wines from the vineyards myself, not normally a pleasure afforded by every tasting.

My final visit was to Breaky Bottom vineyard, an icon of English wine nestled in the South Downs between Lewes and The Channel. Famed for its sparkling Seyval Blanc, one of the world’s best, it is made by Peter Hall, a maverick Francophile who in the early ‘70s saw the potential of the chalk and climate – both akin to Champagne – for world class winemaking. Apart from the growing reputation of his wines, little has changed in this remote cleft in the hills. The vineyard has expanded a bit, but not for profit, rather to satisfy his curiosity for what the Champagne grapes Pinot Noir and Chardonnay might also do on his site. Peter still greets visitors with warmth as sustaining as the pot of coffee he shares when he regales you, more often than not, with the latest travails of boutique winemaking in a marginal climate. His top five blights in recent years include: floods (four in the last fifteen years); frosts cutting yields (more often than not), a plague of snails (to a vine obscuring level - wrong sort for consumption apparently) and just last year an invasion of pheasants from a neighbouring shoot that consumed nearly five tonnes of grapes. At one point in our conversation he asked me why I hadn’t considered embarking on winemaking in England myself and I said I had met him early enough in my wine career to realise you either need very deep pockets or the patience of a saint to make wine in England, and I have neither.

As I sat with him in the sun on the veranda of his flint-built winery, framed by slopes clad with sheep-dotted pastures, and a skylark the only sound punctuating his tales, I felt all the poorer though. I wondered whether he had ever considered giving it up, but I couldn’t picture him so engaged in any other work. He was essentially a philosopher, and each year’s challenge seemed to set his inquisitive mind a conundrum to solve. Was he happy? That’s something I didn’t dare ask, but I hoped so.

The tasting event went well. The geologists were delighted to learn how chalk, sandstone and shingle influenced the South’s vineyards, and of the lives of those eking vinous nuances from the strata. I thought I’d lost them at one point though, as a nervous silence descended when I asked if anyone was familiar with the South Downs national park.

‘Was it something I said?’

One of the hosts spoke up, ‘We all know it much better after today. It’s been the topic of our conference on potential fracking sites.’

As I drove home I thought of Peter and a possible future challenge. One I haven’t yet summoned the courage to mention to him. I hoped that by introducing a human story to what may have hitherto appeared only as minerals on maps to the geologists, I might in some small way influenced their approach. Probably not however, I expect I would have needed to be in front of the finance men, not the geologists, and therein would lie the real challenge. 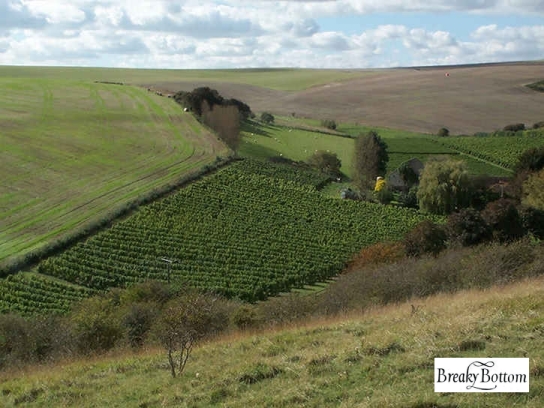