Leaning against my Land Rover in a somewhat diminished state (brought on by a bout of dysentery) it took some moments to recognise this as humorous reference to British exploration. I suppose my mode of dress that morning hadn’t been selected with assimilation into Islamic culture in mind - khaki shorts and Panama hats not something I’d encountered a great deal of in Morocco. Jean Pierre, my host for the morning’s winery visit, looked expectantly as I sought for a response. My response, which whilst not witty, or indeed technically true, indicated he had the right man… “Yes.” I then mentioned the reason for my being a little monosyllabic and asked if we mightn’t stray too far from some form of amenity during the visit.

I was in the car park of Morocco’s only wine Chateau, Chateau Roslane. Although the distinction has about as much official meaning in Morocco as it has in France (the building was an elegant villa painted in soft earth pastels), it was more deserving of the title than a fair proportion of the allotment sheds claiming it in Bordeaux. Symmetrical palm trees shaded the gardens around the building, with vividly coloured lavender bushes blossoming at their feet. The grass seemed to have been clipped with the assistance of a spirit level and an air of order pervaded every corner.

This continued in the immaculate winery. Every thing had its place and between those places was space, giving the inactive building a sense of tranquillity that could not fail to temper the atmosphere at the normally frenetic harvest time. No expense had been spared on equipment, though not equipment designed specifically to replace manual labour, as is the way in many wineries, but to work in harmony with it to gain the best out of the wine. Stacks of small picking baskets stood silently waiting for the vintage next to rows of vibrating sorting tables that would take upwards of twenty to work. Jean Pierre said that the grapes were picked into small containers to preserve quality and that they were sorted rigorously by hand to eliminate poorer ones. I mentioned that they were fortunate to have a good source of inexpensive labour. He explained that one of the company’s directors had recently conducted research into mechanising the harvesting and also eliminating costs in the winery and it was found that considerable savings could be made despite a readily available workforce. He said when the research was presented to the owner, Brahim Zniber, it was dismissed out of hand. He had asked: “What would become of the families of the unemployed workers?”

This is not the sentiment of a man with a communist ethic, but that of a highly successful businessman, and a man, judging by the genuine admiration felt by the people I met that morning, much loved by his staff. Brahim Ziber is now the third richest man in Morocco and the owner of over thirty businesses including insurance, banking and the Moroccan Coca Cola franchise. He started with wine however and his Chateau is his passion. He is the man responsible for Morocco’s wine resurgence, pushing for world recognition not only for his wines, but also official quality designations for the regions from which they come. This promotion has not always sat well with the country’s uneasy, and often paradoxical, relationship with the grape. As a trade figurehead, he was singled out for strong criticism in the national press after a wine festival was held in Meknes in 2007. The festival was seen as diminishing Islam within Morocco. It was as much that the festival was held on a Friday - the day of prayer, one step away from holding it within Ramadan - as that it was seen as overt promotion of wine (there being severe restrictions on its advertising).

There are those who point to parts of the Koran that are apparently permissive of wine consumption: “We give you the fruit of the palm and vine, from which you derive intoxicants and wholesome food” Sura 16:69. There are more who can back their claims that it preaches abstinence “Satan seeks to stir up enmity and hatred among you by means of wine and gambling and keep you from Allah and your prayers, will you not abstain from them?” Sura 5:91.

The reality in Morocco is that a sizable minority has its own interpretation where wine is concerned (an afternoon watching shoppers at a supermarket is enough to convince you of that) without it affecting other aspects of their faith.

As we sat to a tasting, I asked who would be taking over from Mr Zniber when he retired, as, although he looked a man of sixty, he was now in his eighties and was told: “One of his four hundred children.” I looked a little surprised and Jean Pierre smiled and said that twelve are Mr Zniber’s own, seven were adopted, and the rest are in his orphanages, which he saw as part of his faith. I considered that with any faith, any devil to be found would be within the detail, and man’s interpretation, rather than the sentiment. 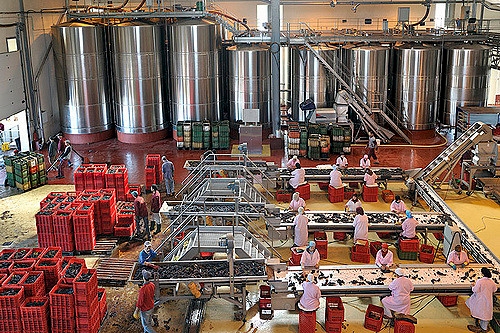