‘This is magnifique,’ declared Samia, as she passed me a glass of inky purple liquid. My normal reaction to such a statement is to look for the contrary viewpoint, but I knew that I’d need to gather my nerve before challenging her.

I was at Domaine Neferis, a wine estate nestled in a mountainous amphitheatre near Tunis. The estate’s villa, with its warm sandstone walls and red clay tiles, looked to have been plucked from a Tuscan landscape. The figure that had approached us down the villa steps gave the theme further impact: the large dark sunglasses and neat denim were those of an Italian starlet – not at all what I had expected.

My knowledge of Muslim society prior to arrival was scant, and, where women were concerned, I had expected Tunisia to conform to the stereotypical image of an Islamic state. This is something that Samia, our host, a female Muslim winemaker (not necessarily in that order), was presumably aware of as she began by explaining that Tunisia is highly progressive in matters regarding women’s rights (I hadn’t asked, maybe my expression gave something away?). These rights were enshrined in law by Habib Bourguiba, the country’s first president after independence in 1956. Known by some as the ‘liberator of women’, he banned polygamy as well as the wearing of the hijab in schools. She also explained that she only employed women at the winery.

I was beginning to think that any piece of writing on the winery would be a shoe-in on women’s hour, when a glance along the rows in one vineyard suggested a letter to Germaine Greer would be more appropriate. The old vines were three feet above the ground, meaning that the grapes would have to be picked at about half that height (back-wrenching work that would have the Health and Safety Executive in the UK spluttering into their Horlicks). These gnarled old plants with their thick twisting trunks provide the juice for arguably Tunisia’s best wine: Selian Reserve. This was an argument however that I’d shortly be having with Samia

The vines are Carignan: normally as unwelcome a component in good wine as antifreeze. They are generally planted for reasons of quantity as they produce lots of fat sugary grapes, but these make flabby alcoholic wines (not a good thing, being flabby and alcoholic). In North Africa carignan was planted by the French who wanted to beef up some of their acidic table wines at home. After independence most of the plantings were ripped up, though some remained, and, as they aged, their wines began to change.

Vines, in keeping with most organisms, become less vigourous with age. In youth they grow with abandon, producing shoots, leaves and branches without too much care for the quality of their output (typical adolescents); but as they mature, quality begins to outweigh quantity in their ambitions. To produce smaller more flavoursome berries becomes their aim and it’s a canny one, as birds will go for these first, making their reproduction more effective (create your own simile here). In part, the reason for the improvement is that they take up less water, so the juice is more concentrated. Also, the roots pass deeper through the earth, picking up different nutrients, assisting diversity of flavour.

So it was with some expectation that we entered the villa. There a table lined with bottles awaited, one of which contained Selian Reserve, the product of these wizened old plants. Its reputation had me expecting it to be a contender for wine of the trip though it turned out not to be so.

We had all but tasted through their excellent range and had only two wines left. Unusually, the best was not being saved until last. Beyond the object of my anticipation - a sleek black bottle with an elegant gilt label - stood a plain one with a handwritten tag.

Samia poured the Selian Reserve, stating, without boast, that many considered it to be the finest wine in Tunisia. As I tasted I was in no mind to argue, the wine indeed was excellent: vivid aromas reminiscent of fruit pastilles, oak smoke and chocolate were supported by a texture that coated the mouth like damson jelly. My disagreement only came at the tasting’s end: I said it couldn’t be the best - at least not when they were making a wine like the one in the last bottle.

She smiled and said that this was a product of the very oldest of these vines and its taste was why they were going to call it Magnifique. 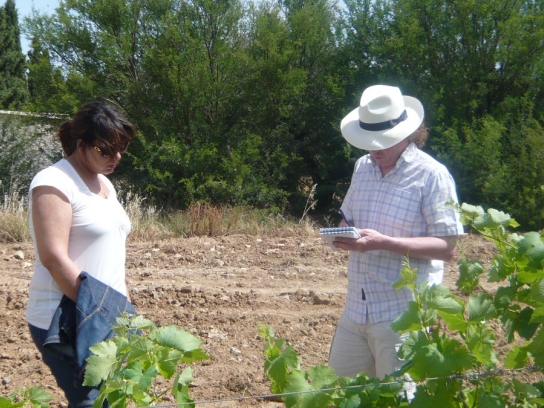